It was more than nine months ago that I left my home country. As I’m trying to recall all the things I’ve been through since then, I can’t help pausing for a minute to think about the differences between the versions of me: the one that left for Germany last year and the current one that returned one week ago.

I can still see myself studying by the light of my desk lamp, motivated only by the stress and pressure I burdened myself with, thinking about my high school years finally coming to an end so that I can have a fresh start. Not that I had a particularly unpleasant time during those eight years; I met some of my best friends there and had some precious moments, but now that I got to know myself in plenty of other aspects, I know that I was just not in the best place there.

Before, I’ve never had as much unbothered me-time as I have since November, so of course, I couldn’t get to know myself on a deeper level, either. In this project, however, I needed to challenge myself, step out of my comfort zone quite often, and discover my strengths and shortcomings, all of which led me closer to knowing what I can be capable of when I’m in the right place. I learnt to take a step back from the conflicts that are not mine, pay less attention to how others might perceive me, take care of myself first to be able to help others later and remain patient as well as kind to myself by not underestimating my worth. Despite my former doubts (and – undeniably – times of hardships), I could get used to speaking three languages on a daily basis (plus starting to learn two more), working with people with various disabilities or moving into a flat where I haven’t even talked to anyone before. Well, not only did I get used to it all, but I also got to love this lifestyle. I feel so lucky to have met so many incredible people: without exaggerating, some of them are the most generous, non-toxically positive, caring human beings I’ve ever interacted with.

Sometimes I wonder how special it was to have a community, a small second family where we genuinely cared about each other and had a safe space to talk about almost anything and where we consciously paid attention not to hurt anyone. It was an ideal world we created for ourselves, and I consider myself really lucky to have been part of it for a while.

Now that this chapter of my life is over, although I already miss it, I must say how grateful I am for all the friendships and memories I made here. And I don’t want to fool anyone; of course, it wasn’t all fun and games: there were times when I felt deeply insecure, questioning and doubting myself, or just genuinely sad for someone; but I firmly believe that – in a way – everything helped me grow or at least learn something new about my inner and/or outer world.

Emöke is hosted by Friedehorst Teilhabe Leben gGmbH on our project financed by the European Solidarity Corps and Jugend für Europa. 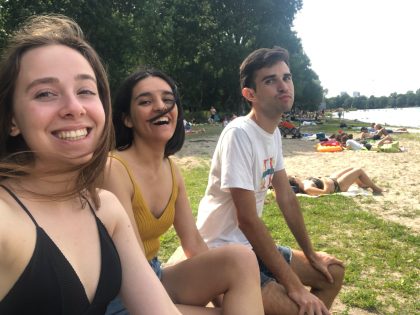