The beginning of the month of July meant the closure of the schools for the almost 3 months long summer holiday periode here in Greece.

With the summer holidays also another aspect of my ESC project began: summer activities. This meant spending the afternoon playing with the kids of the neighbourhood in order to provide some program for the long break until school restarts in mid-September. Soon it was clear that the favourite game of almost all the children was football. Nevertheless, from time to time, they were also interested in other games, such as playing with a tennis ball, drawing on the ground with chalk, playing card games, or doing some handy crafts. However, equipped with a big bag full of different balls, skipping ropes, chalk, water colour and more, we were always ready to spend a fun and usually sporty afternoon with the children. In the morning, the work changed again from helping in the school to working on our internet radio and other websites about the island, as well as continuing to reorganise the library before the start of the new school year. 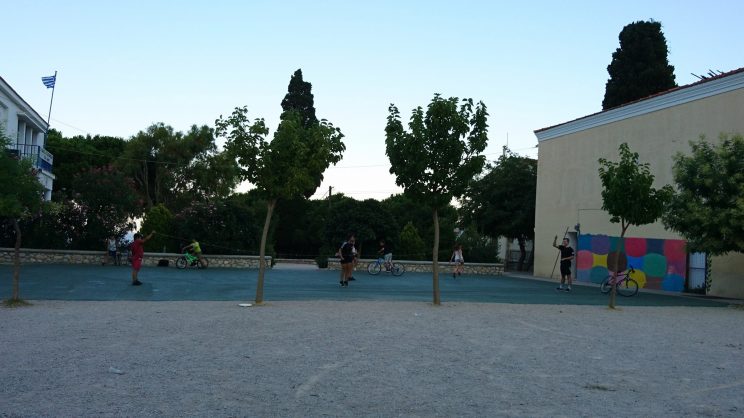 The start of the summer holiday was also the beginning of the travelling season. Chios is a rather un-touristic island, but still some visitors started to come to the island, mostly from the mainland. Even though people were worried about people with Corona coming to the Chios, some measurements were loosened further. For the other volunteers and me that meant that we could go on more trips again – as long as we would stay on the island -, continuing to explore Chios, to write about it and create informative videos about its nature and culture. This time, we went to the central south of the island, to one of the mastic producing villages: Pirgi (Πυργί). The village is not only famous for the precious resin from the mastic tree, but also for its beautifully decorated houses. These have house fronts with geometrical patterns in white and grey, but also drawings of animals, flowers and more. All these decorative elements are made using a special technique called “Xysta” (Ξυστα). For this technique, the walls are covered first with a dark grey layer and then a white lime layer, which is scratched of in some parts of the wall in order to create the patterns. 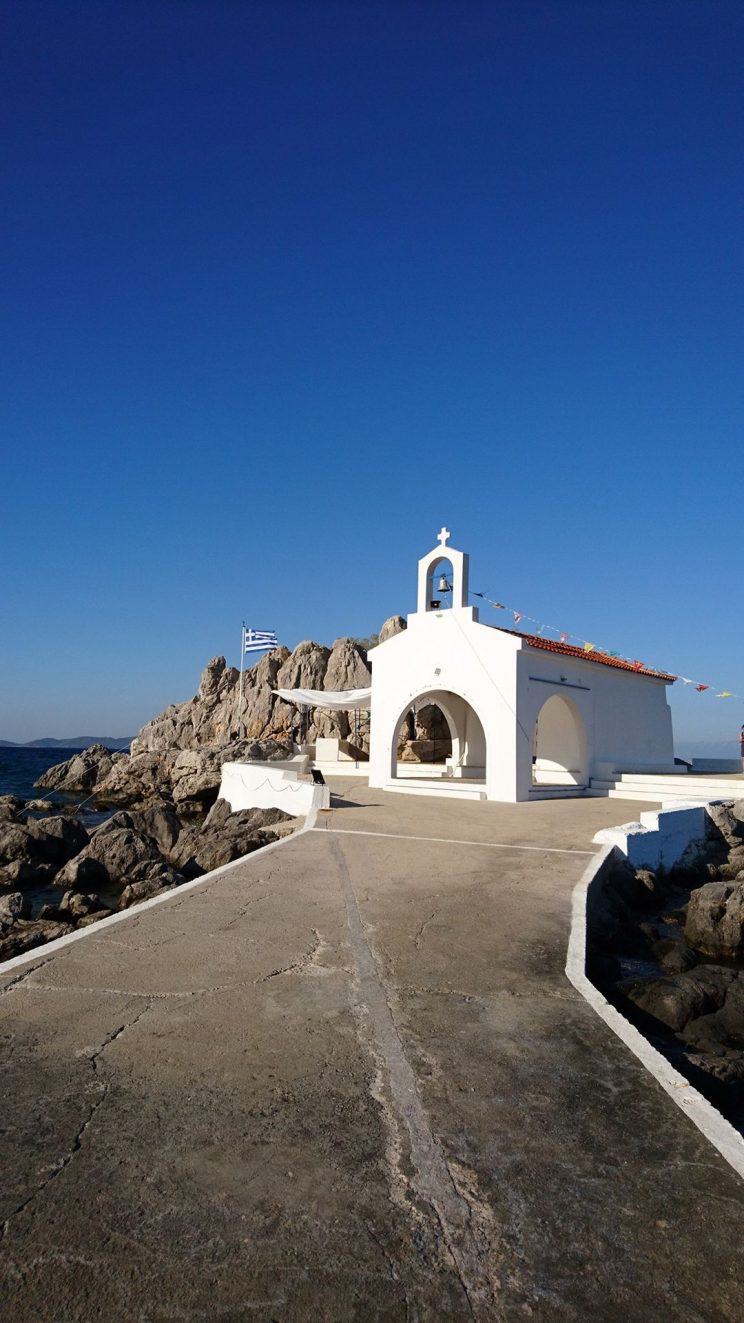 The trip to Pirgi was also the first trip for the newly arrived volunteers who finally had the opportunity to travel to Chios as result of the loosening of the measurements. While it is always great to get to know new people, their arrival also meant saying good bye to some of the other volunteers with whom I spend the last months with and who became close friends. This month was thus also the time to form a new group and redistributing responsibilities. As I was suddenly one of the „old“ volunteers, that meant that together with the other volunteer who arrived with me, I was suddenly responsible for the communication with the hosting organisation. While on the one hand it is great that my hosting organisation is always reachable, on the other hand I had to find out how exhausting it can be if the same is expected from you. No matter if it was for important things like the preparations for the arrival of a new volunteer, or about less important things like the pillow someone left in the living room, suddenly it was part of my responsibilities to make sure the message gets transferred from the hosting organisation to the other volunteers and that everything went smoothly.

However, in order to form a team with the newly arrived volunteers, July was also time for bonding by going to the beach together, sharing our experiences and thoughts during our meals, working together and exploring the island together.

While we got along well, the situation between the local community and the refugees stuck on the island got more tense again. Due to the dry summer and often strong winds, forest fires can be a problem on Chios and in the beginning of July, it happened: A fire started in one of the remaining forests in the centre of the island and two firefighting planes were flying over the island collecting fresh sea water and dropping it over the affected area several times. According to the locals, the refugees from the camp nearby were responsible for it. They were burning there trash in order to avoid vermin. Even though the locals are not necessarily the most reliable source in this case, this incident shows again how difficult the refugee situation is on the island.