Third report about my time in Macedonia after 9 months

The summer in Macedonia was hot, but great at the same time. The city park was the place to be, not during the day, because it was too hot to go out, but in the evening. I didn’t expect the weather to be that hot, but with air conditioning in the office and a fan in my room, it was bearable. But at night in the park, the weather was perfect. At the beginning of July our volunteer Anna from Poland celebrated her birthday and we of course ended up in the park. I also was drinking a bit too much. So after that night I decided to stop drinking when I go out. That was something I was actually planning to do for a long time, but now I took it serious, and it went really well. I could enjoy many evenings completely sober, while other people got drunk. I’m talking about this right now, because that is for sure one of the things I’m gonna remember from my time in Macedonia and something that I’m gonna take to my future life, and something I’m kinda proud of. Not that I was an alcoholic before, but I was really used to drink when going out and to party and I always had trouble enjoying those evenings without alcohol.

While the Covid numbers were low at the beginning of summer, they got higher and higher again with August. Because of that, and because the Macedonian government wanted more citizens to get vaccinated, they put some hard restrictions for unvaccinated people in place. Since the 16th of August, unvaccinated people are not allowed to enter restaurants, bars, clubs and even shopping malls anymore and since the 1st of September also crossing border isn’t possible without vaccine or proof of a negative PCR-test. Luckily, I never really went much to bars and restaurants anyway, because I simply cannot afford it with the money I get, but for the travelling part it was a bit sad, because I postponed many travels to border countries like Kosovo or Serbia because I always thought “oh, I still have plenty of time to do this”. But even with those new restrictions, I could enjoy my time. At the end of August, as well as at the end of September, friends from Germany were visiting me in Macedonia. Especially nice was that my second German visitors, who were 4 friends that I already know for years, have been in Macedonia for my birthday at the end of September. So I had the chance to party together with my German, as well as my local Macedonian and international friends in Macedonia, of course, where else, in the park, and of course under respecting all the Covid protocols 😉 Together with my friends from Germany, I also explored some new places in Macedonia, went to some hikes, spent days at the beach in Ohrid and showed them the local cuisine. They were particularly amazed by some Turkish dishes, like Cig Köfte, Tantuni and Baklava.

As you see, I don’t talk so much about work, maybe because I feel there is not too much to say about work. I still didn’t improve my writing pace, neither my designing skills. The latter is caused by needing too much time for writing my articles, so that at the end of the month there is actually no time left for me to design and get better in designing. I’m not very proud of that but that’s how it is and was. But right now I’m optimistic. I feel like things might change. And I guess I will see in 3 months if this feeling was right or just an illusion.

Chris is hosted by Volunteers Centre Skopje on the project “VOICES to be heard”, financed by JUGEND für Europa and the European Solidarity Corps. 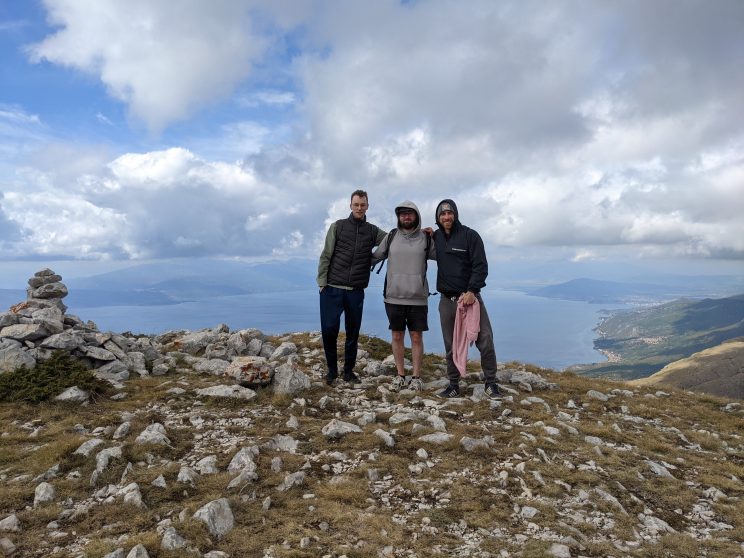