On a farm 80km from Naples, Italy, a group of about 30 youth from all over Europe gathered for a week long training course about migration and human rights. The project was titled “Youth Work For Equality and Unity” #YW4EU. The other countries besides our German team that were represented at the training were Italy, Greece, Turkey, Sweden, Croatia, North Macedonia, and the United Kingdom. Since living in Germany, the topic has reached salience in my environment. Living in California, the “migration crisis” seemed so far away even though the NGO I worked for at the time was involved in refugee resettlement. Living in a society where refugees had the barrier of applications and oceans is a completely different situation than living in a society where refugees have walked thousands of kilometers to reach your city. Now I know migrants who walked and/or sailed to Germany or other European countries from their countries of origin. 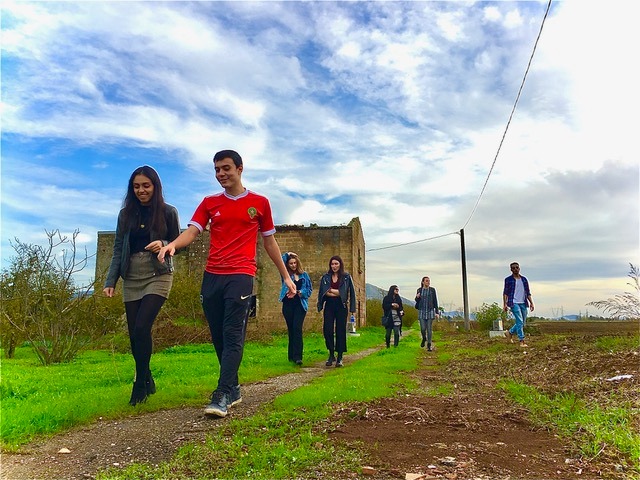 What the Erasmus+ project added to my broadened conception of migration and human rights in Europe was the “big picture” information and the experiences of people in other countries. These Erasmus+ projects are sometimes the first time I meet people who are from the countries represented, which makes it a really very special environment. Besides the participants, we had 3 facilitators who guided us through the week.

On the first day of the project, we spend the entire day playing games to learn each other’s names and get to know each other a bit. The idea is also to build a sense of trust and solidarity among the project participants. This is crucial to make the rest of the week as impactful as it can be since non-formal education is very group-oriented.Then we spend a couple of days learning about the topic through a variety of non-formal education workshops. To formulate and learn the definitions of terminology relating to migration and human rights we split into smaller groups to match definitions to their respective terms. Some terms applied to multiple definitions since there were different aspects to, for example, the term refugee.

Then we came back together as a large group to compare our assignments. Later we learned the difference between two crucial legal frameworks in the field: the European Convention on Human Rights and Charter of Fundamental Rights of the European Union. We did this by separating the room into two halves, one for ‘true’ and one for ‘false’. The facilitator then read out statements regarding each framework and we as participants had to decide if it was true or false. This required us to think critically about the statement, our previous knowledge, and our assumptions. After each statement we took time to discuss the statement and the aspects of the framework that were misunderstood or misinterpreted. By the end of these activities, we gained a solid foundation of the “big picture” regarding the status of migration and human rights from both a policy and a grassroots perspective. 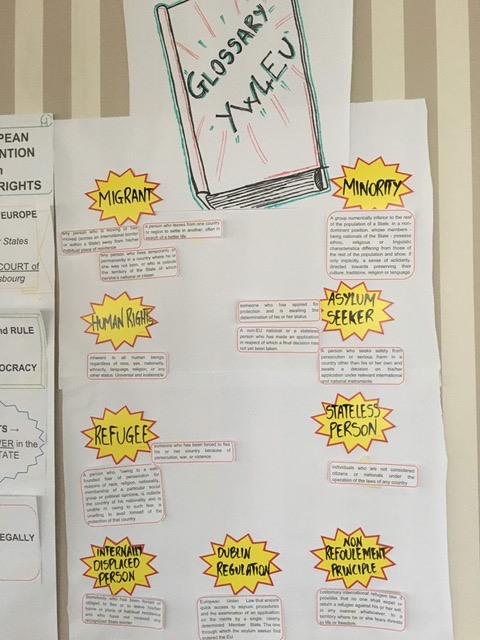 The next phase of the project is for us participants to develop our own migration and human rights related workshops. We do this in intercultural teams and have about half a day to plan and prepare for facilitating the workshop with the project participants. I was a part of a team with an Italian, Hungarian, and Greek participants and we planned a workshop on LGBTQIA+ rights in the EU, with a focus on the countries represented in the project. We planned a workshop where participants would split up into teams to research the status of rights in our countries. Since the workshop was limited to 30 minutes and we not only had to implement the workshop but we also had to begin with an energizer and end with a debrief of the activity. We provided the teams with a website, , that aggregates all of the information in one place. As part of the debrief we also revealed the ranking of the countries in terms of LGBTQIA+ friendly policies.

Also during the week we had the opportunity to go into Naples for an NGO visit and to explore the city. We visited the Casa Cidis project, which is a center for migrants who arrived in Italy as children and have since aged out of the system that supports minors. The center offers language classes and bureaucratic support. Casa Cidis in particular was a new venture for the organization and was a tourist hostel managed and maintained by the migrants.

Along the way, Erasmus+ projects are not only about the activities planned on paper, it’s about the exchange between participants and the introspective space that the project provides. If the environment is curated by the facilitators and participants in the right way, one can really learn quite a bit about themselves and the world around them. This environment was definitely present in YW4EU and I think that everyone that was there took something from the training course that they will carry home with them.