It is surprising how fast the unknown can become known and a foreign land become home. And how fast time runs sometimes. It seems just now that two strangers picked me up at the airport and now I‘m already saying goodbye to them as good friends. I was in Skopje, North-Macedonia for 9 months #volunteering via European Solidarity Corps.

On my second day I got already thrown into the middle of everything. The yearly NGO fair in Skopje took place, organized by my host organization . Instead of arriving slowly, sitting in an office, I had to carry crates and boxes and chairs and right off the bat got to know thousands of people. Getting up on the morning of the fair, I was fairly grumpy and felt like going home. What am I doing here, why do I have to work here, for people I barely know, for a purpose I don‘t know. Yet, at the end of the day, things felt all in place again. I was happy. I had gotten to know many great people, everybody had been really friendly and open and my coordinators and colleagues regularly asked how I felt and whether I needed something. 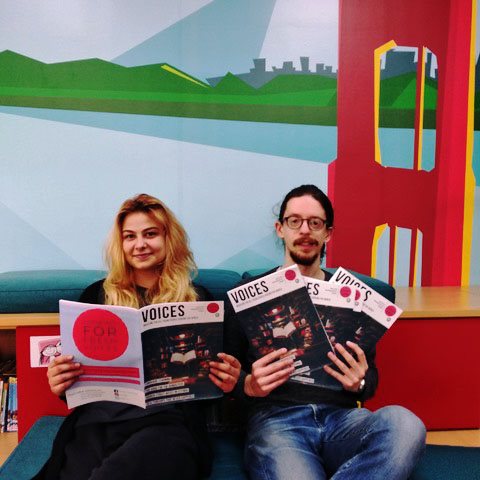 The main project I worked on was the youth magazine VOICES. Together with the other volunteers, I wrote and designed articles and managed the magazine. That was quite interesting as it gave us a lot of freedom for our own ideas and for taking initiative. On the other hand, we were involved in all other aspects of the work of VCS. We organized workshops at highschools as well as various events such as language karaoke and movie nights.

For a while I also gave German conversation classes for the public. The biggest challenge for me was a youth exchange to which I went as an assistant and also facilitated few workshops. I had trouble fitting into my role as part of the trainer/facilitator team. Additionally there was a noticeable age difference and often a language barrier which made it difficult to become part of th

e group. After a week I was quite worn out. But I also had learned a fair bit and grown as a person. I realized for example that I am able and content to teach people, in formal as well as informal ways. I think that is one of the best things of a voluntary service – it throws you into all kinds of unexpected and sometimes challenging situations, forcing you to find solutions. Not everything was easy but everything helped me to learn and grow.

On the other hand, I did not experience all that much of a culture shock. Except maybe in the airport lines which taught me that people in North Macedonia have a very different understanding of personal space and distance than I do. But in the country, people where so friendly and welcoming that it was easy to overlook and accept some of the less inviting aspects of Skopje, such as the omnipresent trash and the smog. The latter and the general treatment of the environment there made me realize how many things actually do work in Germany and how grateful I can be to have been born here. Talking with the locals was quite eye-opening. I realized that as a volunteer with a paid accommodation and some pocket money I can live well in this country while on the other hand many people have to work two or three jobs just to make ends-meet. In that sense it was also a humbling experience, which made me appreciate much more the opportunities I have by grace of being born in a rich European country.

These encounters with people, be it locals or other volunteers are what made my stay the most memorable. Some were unique and will rest only in my heart as precious memories, others will, as friendships stay for hopefully a long time.