My journey to Chios began on 30th August 2019. Chios is the fifth biggest island of Greece. My group, consisting of five other boys and girls, and I live Vrontados, which is a little place located on the coast and inhabited by approximately 6000 people. Our home is one hour away from the city center and only 5 minutes away from the beach.

The project I am participating in is called “TES” meaning Technology, Education and Sports. These are the areas covered by the volunteers during the project.

In the morning, I go to one of the three local primary schools and serve as an assistant teacher working four hours every day. Obviously, I am not replacing a teacher, but my task is to support them in activities such as handicraft work and theatre as well as in the English or P.E. classes. Or simply, our task is to play with the kids during the breaks.

In the afternoon, we have some leisure time and everyone can use it individually. Usually, we cook together as a group for lunch and afterwards, if the weather is good, I enjoy going to the beach to have a swim, relax or just to study the Greek language. 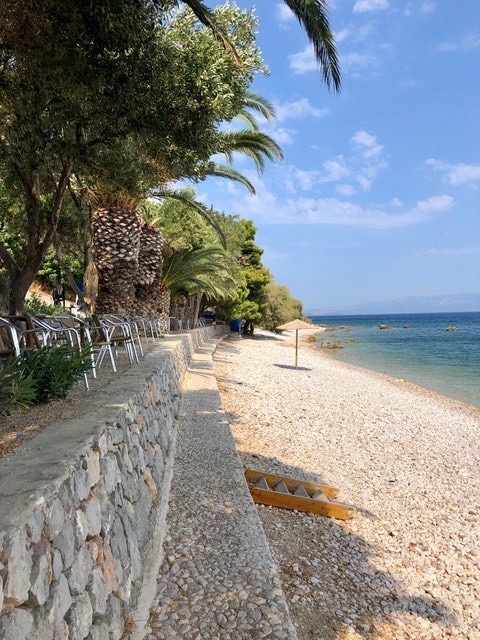 The active sporty aspect of the project can predominantly be seen during summer. In the summer holidays, we meet the kids at the school in the late afternoon and offer them various leisure activities, e.g. handicraft work, football or basketball.

In the evening, we are working on our articles for one of the four websites the project operates. The topics vary weekly – from the Greek culture to certain events we participated in.

I applied for this project hoping to explore the Greek culture and language more intensively. From my side, I wanted to contribute as much as possible to achieve my goals. Furthermore, I wanted to enlarge my own perspective by making new experiences as well as facing new challenges. After 2 ½ months, I can definitely say that my expectations have been exceeded in a positive way.

By getting the chance to support the local schools, it is fairly easy to get a direct connection to the local community. The frequent contact with kids, parents and teachers enables me to have a daily cultural exchange with them.

Despite the fact that the language barrier was a challenge for me, my work with the kids goes smoothly. By playing with the kids, I usually learn Greek words very quickly. Moreover, using my body language and communicating with only little vocabulary is, for the time being, sufficient for working with the kids. Nevertheless, communication poses a challenge for me since I can only express myself to a certain degree. However, I see this challenge as a motivation to work more intensively on learning the Greek language and to enlarge my communication skills as fast as possible.

Due to the work in the schools and kinder gardens of Vrontados, volunteers like me also take part in the school trips. This enables us to explore new places on the island and, at the same time, get to know the kids better. 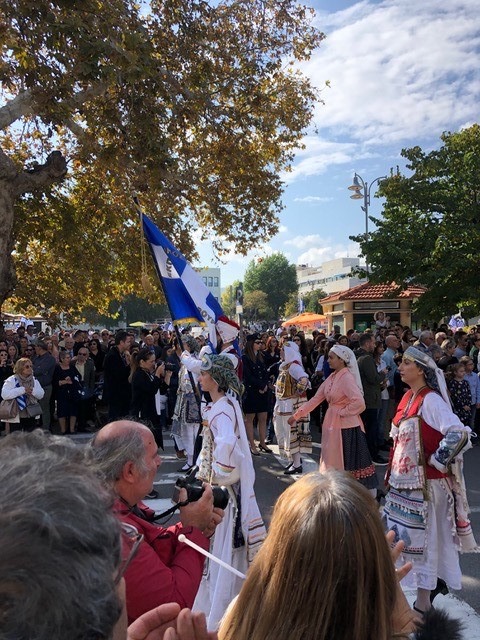 In case of a national holiday or an event being around the corner, the kids usually prepare something to celebrate this special event. Recently, we celebrated the “Independence Day of Chios” and the kids in the school performed a theatre play. We helped with designing the costumes for the play and supported them during the rehearsals. This gave us the opportunity to not only get an insight into the daily school life but also to learn more about Greek history. Simultaneously, we learn about the past of the island and how it embossed the people and the structure of the island.

Next to the cultural exchange, I am experiencing, I also learn how to work and live together as a team. It is the first time that I live together with so many people in a shared apartment. Sometimes, different opinions and interests collide with each other, but in general we are harmonizing well as a group. A group of people that were completely foreign to each other at first is now a group in which friendships have already developed.

On the weekends, we often undertake something together. We either explore the different parts of the island, go to the city center to drink a coffee or play board or card games.

At the end of October, we used the long weekend to travel to Turkey. With the ferry the journey only lasted 30 minutes. These events make us have a stronger bond within the group. Additionally, it was also nice to experience the cultural differences between Greece and Turkey since they both have a common history.

On the Monday afterwards, which was free due to the national holiday Ochi-Day, we watched the parades in the city and some of the kids of our schools also participated in the parades.

It was one of many interesting experiences and I am looking forward to many other experiences that will come up in the next months in Chios.

Esther is part of our project “Global Change Makers”, financed by Jugend für Europa and the European Solidarity Corps Programme.